Who are the Kardashians and why do they have their own television show? I’d wondered from time to time as photos of one or another of the Kardashian sisters posing on a red carpet turned up in the media. It was only slightly more enlightening to watch a couple episodes of Kourtney and Khloé Take Miami, an E! spinoff of Keeping Up with the Kardashians, with a visiting friend who counts the shows among her guilty pleasures. She was hoping for a repeat of the “Wax On, Wax Off” episode, which involved an at-home bikini wax gone wrong, so I could get the full flavor of the Kardashian lifestyle.

All well and good.  I’m more familiar with the various Bravo “Real Housewives” than I should admit.  But I had no idea how much influence the Kardashians wield until the same said friend sent me on an errand to the new DASH store in Soho (Have I failed to mention that Kim, Khloé and Kourtney have a line of boutiques?) to pick up a couple t-shirts for her teenage daughters.

I expected the crowd.  Googling the store’s location pulled up stories of how rabid fans had turned the recent grand opening into a near mob scene.  I only sort of expected what I found inside. It was easy to predict that the store would carry lots of trendy clothes with celebrity designer price tags. But most of the merch being snapped up on this particular day consisted of t-shirts and other logo items.  I’d swallow the $60 price tag for a well-designed tee with a great logo, but at the risk of sounding like my mother, these were cheap, thin, white tees with the store logo, a simple typographical D-A-S-H. 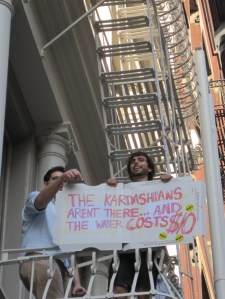 Shoppers were hauling away so many t-shirt s that they were being kept in a pile on the checkout counter.  The overly excited teens I’d pushed through to get in the door, the ones who were ecstatic just to have found the place, were satisfied to get something, anything, with the DASH logo.  As I took a look around, at the oversized portraits of Kim, Khloé and Kourtney hanging on one wall, and the racks of drape-y black and muted-color clothing that could just as easily be found in any other Soho store, I was more than a little disturbed by how eager all these shoppers were to fork over their dollars to the business interests of an already wealthy family, how desperately they wanted to get  their hands on expensive, but inexpensively made items bearing the name of sisters who are famous only for being famous.

I’m not knocking the fashion aspirations or talents of the Kardashians. Apparently they are merchandisers, not designers. They’re just the epitome of celebrity-brand consciousness that drives mass-market fashion today, with little regard for the quality of design or product. My friend’s recent visit had involved a couple days of clandestine, backroom visits to Canal street vendors, in search of the specific designer knockoff handbags on her daughter’s wish list.  I don’t believe all those D&G sunglasses sported by DASH customers were authentic, but the important thing was to have the right of-the-moment designer logo.

Aspiration is not a bad thing, but there’s something to be said for desiring a designer brand because of the actual design, not just the name emblazoned all over it.  Why the devotion to celebrities who don’t actually create anything, or even really do anything of consequence at all?  Which leads me, I’m afraid, back to the original question: Who are the Kardashians and why are people lining up to get into their store?